Skip to nav Skip to main

From enjoying a summer swim under the midnight sun to taking in the northern lights in winter, with nature, light and the arctic climate serving as that extra spice. Sometimes cold, bordering on what’s comfortable, but still alluring. This is Arctic Bath, a unique hotel attraction on Lule River, situated downstream from the bridges of Bodträskfors, alternating between frozen and floating depending on season.

The idea of a floating sauna first came to Harads resident Per-Anders Eriksson during the opening of Treehotel in 2010. At first, the vision was a glass cube on a raft. Bertil Harström, who designed Treehotel’s The Bird’s Nest, took over the idea and in 2013 he and Johan Kauppi designed Arctic Bath’s floating, circular building.

A visual throwback to an old tradition

Located just south of the arctic circle, this natural spa retreat is a reminder of the importance of forests for the entire country’s development. The architecture seamlessly integrates with the surrounding nature and is more particularly influenced by the timber floating era. For a long time, Lule River and its tributaries served as transportation routes for timber, an old tradition in the north. The construction of our circular main building, which floats on Lule River, imitates logs getting jammed in rapids, something that wasn’t too uncommon for those transporting timber. 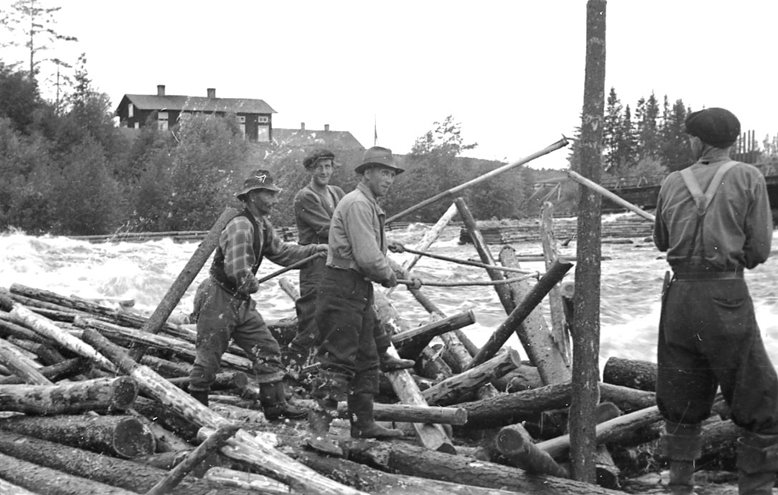 In Norrbotten, humans have cultivated the earth for 300 generations, with fishing, hunting and trading as important complements to village life. Findings along Lule River suggest settlements dating back to the Stone Age. For the past couple of hundred years, the region has gone through a large structural change. But while some enthusiastic entrepreneurs succeeded moving parts of the region into the modern age, many were left completely broke. However, it led to work opportunities for the people living in along the rivers, with many going into forestry, sawmilling and rafting.

The water, rich in salmon, was for a long time the people’s road. A frozen pathway in winter, and in summer rafts and boats were used to transport people and goods, a need which increased by the mid 1800’s. Docks were built along the river, and competing companies soon filled the river and tributaries with vessels. Even the residents ran traffic along the water. But as the automobile industry slowly started taking over transportation of goods and travelers, organized boat trips across Lule River ended by 1924.

But as humans started favoring traveling by road, the water was still used for transporting timber and tar barrels up until the 1960s, contributing financially to the resident population for a couple of weeks during spring.

Lule River is still considered Sweden’s most profitable river, but not much is left of the Golden Age of timber transport. Of industrialization in Norrbotten, we find mere traces. At Arctic Bath, we are proud to carry on the tradition, reminding visitors and residents of the importance the water has had for both our region and the entire country, and the legacy of timber.

We hope to see you in Harads!